The intersection of faith and politics

Religion and Politics seem to be about where all my interests overlap. I've more experience in church governance than anything else outside of school. At school, I'm most fascinated studying Turkey and Iran, which are both outliers for the role of religion within their government. My advisor has made his work studying Western Europe, and the consensus state that failed tom emerge in 1918 but came about after 1945; a consensus marked clearly by the inclusion of religious parties in many mixed-confessional nations. The role of confessional political parties in post-war Europe is significant enough that a case has been made attributing the rise of fascism to a lack of meaningful participation in politics by the deeply religious. It is an intersection so rich that I go from idle musing to wonkish details in seconds.

In academia, this works out well: comparing the struggles that led Europe to its mostly secular public sphere coexisting with the occasional state-sponsored church is a valuable reference point for understanding similar the church and state relations happening elsewhere in the world today. Very good, but very niche.

The more immediate intersection of religion and politics, and the impetus behind this post, was their role in the politics of the US today. On twitter, many friends of mine, whose opinions I value, argued that if churches take political stances, they should lose their non-profit status. I mentioned that churches can lose tax-exemption for endorsing candidates, but this only slightly dodged the issue. What matters is not so much that a tax-exempt organization doesn't support specific people - it matters that they both get to be tax-exempt and engage so actively in the public sphere.

At the core of my friends' distaste for politically-vocal religion are images like this one: 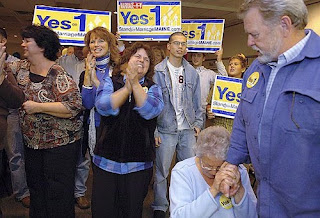 It's deplorable activity, for which the correct response is disgust, distaste, and shaming. But these people should never be forcibly excluded from politics. If we exclude them, we exclude the very idea the morality can be based on religious experiences/teachings, and we are left with secularism alone to inform our collective values. There's an argument to be made for that - secularism is the shared values of everyone sans religion, and in a world where multiple religious interpretations exist, removing religion altogether has a lot to say for it. Another large part of the European consensus involves having a forcibly secular public sphere.

But there are problems with that. In France, the secular public sphere has invaded the realm of personal choice and religious practice, where most notably muslim women are forbidden from wearing veils in public. Rather than allowing for a shared society of shared values, that's oppressive. And in England, there has been controversy over the relation between the country's historic legal system and the values of some of its residents. This lead the Archbishop of Canterbury to claim that Shari'a law in the UK will be inevitable, and led a Tory shadow minister to say in response:

"We must ensure people of all backgrounds and religions are treated equally before the law. Freedom under the law allows respect for some religious practices. But let's be clear: all British citizens must be subject to British laws developed through parliament and the courts."

While the debate is framed as between religious law and secular law, the religious context and values that formed and informed british law go unmentioned. What is ostensibly secular law tends to reflect the values of protestants fairly closely. In this case, trying to keep the religious out in the name of secularism is similar to the nativists of the 1890s-1920s trying to keep southern Europeans out of the USA in the name of "Nativism". It can be done, sure, but it's hypocritical, and it assumes as normal a state that was itself the result of centuries of change.

But even more important than the implicit religious values that informed secularism to the inclusion and protection of religious institutions as tax exempt is the role of religious activism. The easy example here is the civil rights movement of the 1950s and 1960s in the United States, and it's one of the most meaningful as well. Nationwide religious associations motivated and coordinated activists on an issue that was as explicitly political as it was anything else. Religious groups also protested and argued against civil right in the South, too; even my Unitarian church suffered a split thanks to disagreement over the civil rights movement. But the civil rights movement could not have acted as it did, and had the success it did, if it did so without the religious values that enabled it to both challenge the status quo and to call upon the US to live up to its own ideals.

Today, at All Souls Church in DC, Mayor Fenty signed into law a bill granting marriage equality to gay and lesbian couples. This is the second-to-last step (a confirmation by the national legislature is next) of a long campaign, spearheaded by the religious community of DC and helped by the Unitarian Universalist Association's Standing on the Side of Love campaign. Here was religion acting inconcert with secular society to better secure the rights of all citizens, and this was the result of seeing marriage equality as not just a secular concern, but as one with a religious mandate behind it. This activism in specific is crucial to the purpose of our nation, and having religious activism as a valid means of expression, as a protected means of expression, is vital the vibrancy of our democracy. And crucial to all of this: we must let religious organizations be invested in this world. If we take that away, if we make it hard for religious groups to engage with the nation in which they exist, we lose the participation of part of the population (itself a problem in democracy), and we lose the ability for religion to remind us of our higher values and nobler virtues.

Kelsey Atherton
I have a degree in political science from Tulane University. I've this absurd idealism, which matches well with my having no plans to improve the world, but some general notion that I should. I'd like to write for Foreign Affairs someday, retire and teach, and perhaps do a bit of Unitarian ministry. Also, I tend to spend an awful lot of time reading history books and designing wargames that I never end up playing.